Here’s my first shot with the HD Video Camera, a Canon Vixia HD30. It was a classic software project – I got the camera, but I had to update to iMovie ’09 so the file format would be recognized, and I had to update to Leopard to be able to upgrade iMovie. Two weeks later… here it is.

I’m surprised the demand HD puts on my machine, I have a Sony VAIO desktop and it has a hard time not dropping frames in full screen HD while watching on YouTube. The original off the camera is dead on, and if you watch in a smaller window no problem. I’d be interested in hearing how well it plays for you. 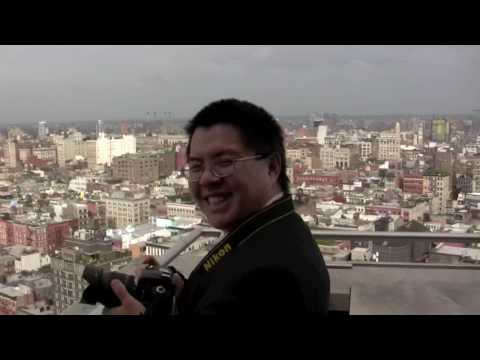 My wife’s friend is a teacher and she has a sign that says “You are special and unique, just like everyone else”. So for the record, I am unique as the only John J. M. Wall III and in fact, the M. has never really been made public and even the Goog doesn’t have it in the index yet.

For some reason, it’s been all about me this week. Bob decided to name this week’s episode of the Beancast after me (because of the snappy jingles he introduced for each co-host this week).

Then, high school basketball phenom John Wall signed with the University of Kentucky, causing “John Wall” to trend on Twitter. Two people mentioned it to me this morning, Mike Volpe over at HubSpot who blogged about it, and my nephew Ben watching SportsCenter at home. I mentioned to Ben that some of the hoop scouting blogs said he had “shady handlers” and was arrested for breaking and entering a few weeks ago. He said “Yeah, sounds like the kid’s going to the NBA”. I don’t believe any of the negative press about John, from what I’ve heard about the moral and ethical standards of college recruiters I believe that people would say anything to make him look bad in the eyes of other schools.

In an even more bizarre coincidence I went to UMass during John Calipari’s run, and I have the picture to prove that this is not the first time Calipari/Wall has been on film. For those who don’t follow College Hoops, Calipari energized UMass as coach starting in 1988, and is now at Kentucky and got the Blue Chip recruit for the Blue Cats.

UMass basketball is a topic for another post, but let me at least say that when I was a Freshman I could walk in at any time during a game and get to be within 5 rows of the team, by the time I left people were sleeping out over night in the cold to enter ticket lotteries. I’d like to say that this is because I am the ultimate UMass hoops fan, but the truth is that one of my classmates was on the Women’s team and they played before the guys and I used to watch both games.

The hot recruit from Word of God, NC is not even the closest match, there’s an Attorney in Maine named John J. Wall III, a California photographer, the guy who owns JohnWall.com, and a CEO who grew his first company to $150M (that’s the record I’m shooting for and I’ll be happy with 1/5th of that). There’s also one of those emails that your crazy Uncle sends you with a long letter about sending liberals to some other country or something, written by a John Wall. I usually ignore the Facebook requests from that one, although I give special attention to ultra conservative groups asking for my help to overthrow the government and add them to my firewall block list, as well as the conservative students that all seem to be female, from southern schools, in sororities and tend to have interesting spring break pictures. I may have friended a couple of those, or at least passed the links on. (Hello people?!? One day you may be looking for JOBS….)

Bringing it back to the stuff I normally write about – it’s interesting how technology deals with the brand mismatch. I knew that this college recruiting season would be a big deal almost 2 years ago, the first time John started getting attention from college scouts and showing up in my Google Alerts.

After months of tuning my Alert has been honed to:

As a result I’m still getting info about me and I didn’t get a single alert about him signing today.

On the other hand is my own brand. While it is true that I no longer own page 1, I’m still listed there. When I first saw this coming I also did a little research and noted that the Michael Jordan who teaches stats at Cal Berkeley always has a spot on the first page, regardless of what #23 is up to. That and the fact that there are injuries to be avoided and rings to be won before the chance of the press really piling up for Wall, and as much as I think it would be great to see him go up to the big show, the odds are tough (but I think he can pull it off).

As long as I continue to generate content (especially in the off season), I’ll show up in the places I need to. There’s also another post in the fact that I am not looking to grow market awareness, I’m already at a point of having to turn down projects to work on because there are not enough hours in the day. My focus is not on getting more eyeballs, but generating more value in a fixed period of time for my stakeholders and myself.

The JohnWall.com URL has been gone for years, I do have john-wall.com and all other relevant URLs on watch lists so I’ll be notified if they come up. I do use my name in the Title tag over at The M Show, but podcast blogs are already in the hole when it comes to Google juice with the normal cast getting 75% or more of the action from iTunes. And don’t tell anyone but The M Show was written off about 6 months ago, I still do it for fun and the remaining “subscribers” that I just call friends and family.

This will probably end up being one of the topics we discuss tomorrow morning on Marketing Over Coffee, so be sure to check out the Thursday show. One final plug – Chip Griffin had me on as a guest for the Bullseye Media Radio (aptly titled “All Stupid, All the Time”), you can check that out here. Congrats to John and Coach Cal, you’ll be on my brackets for the next couple of years!

I saw Eddie Izzard on The Graham Norton show and I couldn’t stop laughing about this for the next hour.  Aside from a few f-bombs it’s safe for work.

SugarCRM is an open source CRM system, kind of a David to Salesforce.com’s Goliath. It’s been doing very well, but there was a surprise last week as the Co-Founder and CEO stepped down.

Check out this post: Never before has news been gathered and spread so fast. Is it any wonder that trade magazines are doomed to extinction?

For my dear diehard fans that originally subscribed to the feed on the old domain, please subscribe to the new feed:

For some reason, during the transfer to the new domain, the old feed became a partial feed, the new one is a full feed. If you are not familiar with feeds I encourage you to check out Google Reader, it allows you to subscribe to the websites you like so that you are notified when new content is posted instead of having to manually take a look all the time (I’m able to keep up with over 300 websites daily in less than 10 minutes a day).

Thanks to Daniel Johnson, Jr. who pointed this out to me (I had no clue), and to Chris Brogan who mentioned the prior post on Twitter giving me a flood of new followers.

I’ve used Samsonite luggage all of my life. My parents gave me an old school suitcase when I was a kid (back when one of their competitors had an ad with a gorilla beating the crap out of a suitcase).

When I graduated from college I had a Samsonite Briefcase (yes, and I even wore a suit to work too, every day), and a garment bag that I put 5 years of heavy travel on before it finally fell apart. From there I got a rolling carry-on that I was able to beat up on for more than 10 years. A few weeks ago I noticed that one of the wheels had cracked in half and I knew that it would only be a matter of time before the bag was retired.

As I was dragging it around New York City last week the wheel hit the doorframe as it came in and I saw a piece of the wheel fall off. To my amazement, more pieces continued to fall off and when it was done I saw that the wheel was made up of an outer and inner shell. As the original wheel fell off, a second interior wheel was exposed and the bag continued to roll along with no problem.

You can talk all you want about a product but when one performs like that under fire, the stories are very easy to tell.

I’ll probably be able to squeeze a few more trips out of this bag but I imagine by Christmas I’ll be looking at an upgrade.

Those are the best words on TV. Nothing else sets up such a sense of excitement and anticipation.

Here’s the live Marketing Over Coffee from the PRSA, it was cool to have a crowd bigger than the staff of Dunks for the show. If you are into marketing you may find it entertaining, for everyone else, I’d suggest Hot Rod over this for entertainment value.

I’ve had a lot of random thoughts about the current financial crisis, and the role the media in shaping the public opinion.  I get the feeling that the economy will bounce back when people get tired of hearing about bad news. Will consumer spending patterns really change so that Americans actually do some saving rather than live off debt?

I’m all set with every marketing campaign or event talking about how to do “x” in this economy, or in this recession, or in the downturn. From a sales/marketing perspective I haven’t heard anything from any of these sessions that wasn’t crap.

Yes, you should step up your marketing during a recession, the brands that do will never have an easier time getting attention. This is about as useful as saying “if you are in the desert you really need to drink more water”. The problem is that you have no budget and you need sales to get that budget.

Am I the only person that’s offended by these arguements? As if last all the projects I was working on last year were drowing in inefficiencies and had no concern for budget- “Yeah that free SUV campaign was a big mistake, and the junkets to the Bahamas, maybe we should try email campaigns, webinars and social media now”.

Panic and fear spread. I had a good laugh last night at the PRSA cocktail event as we came up with a list of the previous “Swine Flu” panics:

Spreading disaster makes for great news, who cares that if you add up all of those they are nothing compared to Heart Disease, or diseases that could be wiped out of developing countries. That stuff is just too boring. I’m enjoying all the great buys on Craig’s List, but the financial news is boring me. Move along people, nothing to see here.